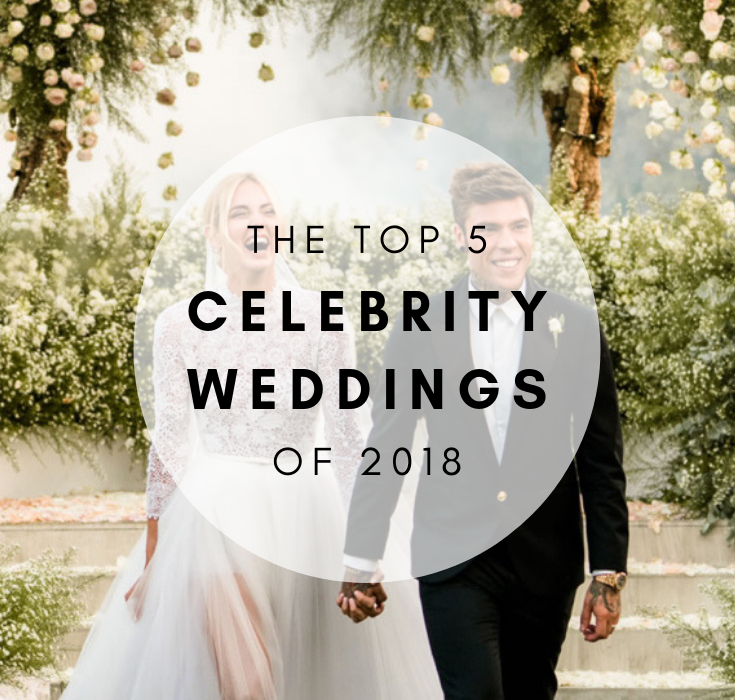 2018 has certainly been the year of celebrity weddings. Royalty, film stars, pop stars, supermodels, reality TV and social media stars – we’ve seen them all tying the knot this past year. And while some of them surprised us with secret, intimate weddings (think Miley Cyrus and Liam Hemsworth or Gwyneth Paltrow and Brad Falchuk) that only allowed us a little sneak peak of their special day, many of them opted for the grand, luxurious celebration that we have come to expect (and love!) in a celebrity wedding.

Although we find intimate, low-key ceremonies super personal and incredibly romantic, we can’t help but feel incredibly inspired by the stunning, swoon-worthy, elaborate and grandiose weddings we have seen some of our favourite celebrities throw this year. So here it is – our list of the most inspiring celebrity weddings of 2018:

Made in Chelsea stars Millie Mackintosh and Hugo Taylor officially got married at Chelsea Old Town Hall in June 2018, just three days before throwing an awe-inspiring religious blessing ceremony and marquee reception at a private family estate in Whithurst Park that looked like something out of a fantasy. Thanks to Hello Magazine, who got an exclusive on the details of their special day, we were able to admire their inspiring décor, including one of the most spectacular ceremony arches we had ever seen – a huge floral installation created of countless delphiniums, roses, hydrangeas, stocks, wisteria and mini bubble balloons by florist Early Hours London.

The reception setup was equally impressive. The couple opted for a clear roof Joseph Benjamin marquee draped in lush florals and greenery and filled with trendy naked wooden tables adorned with bowls of lush pink and red peonies, and gorgeous vintage glassware and tableware with golden accents. For the ceremony the bride wore a bespoke Halfpenny London dress. Overall the couple was thrilled with their wedding day, stating that “the whole day was an out of body experience” and “it’s been everything we had ever dreamed of times a thousand”. We simply love the style and sophistication of this wedding, which is why we think this couple’s nuptials deserve a place among the top celebrity weddings this year.

Victoria’s Secret Angel Chanel Iman and New York Giants receiver Sterling Shepard’s wedding in March 2018 was a truly glorious affair, earning them the fourth place on our list. Just three months after their engagement the couple married at the iconic Beverly Hills Hotel, inviting their closest family and friends. Despite the short time frame, and with the help of American wedding planner Mindy Weiss, the couple pulled off an utterly glamorous, timeless celebration. The couple was wed at a romantic white flower garden ceremony with a lavish floral installation as the central piece of their ceremony décor. The bride walked down the fragrant rose-lined aisle in a stunning sleeveless Zahair Murad gown with a silk tulle bolero embroidered with shimmering 3D floral appliqués.

The glamorous, ritzy theme was continued at the couple’s reception, which was showered in sumptuous blooms and romantically lit with candles and fairy lights. The tables were styled with the super trendy rose gold infinity chairs, satin ivory linens and lush white, cream and blush floral centrepieces. The couple’s lovely five-tiered wedding cake was adorned with pearls and overflowing with roses in shades of blush, champagne and lilac pink. The bride dazzled the guests again at the reception by changing into another Zahair Murad gown from the Fall 2018 collection made of blush pink tulle and covered in petal appliqué. Chanel admitted she wanted the wedding to have a classic style she would not regret looking back on years down the line, a goal that she certainly achieved by creating a wedding that fully encapsulates timeless elegance.

Priyanka Chopra and Nick Jonas’ wedding is probably the most extravagant celebrity wedding of 2018. The week-long festivities began with a dinner party in Mumbai, followed by a puja (prayer) ceremony hosted by the bride’s mother, to which the entire wedding party wore traditional Indian dress. The mehendi (an Indian ritual of applying henna before the wedding), where the couple held a Team Bride and Team Groom cricket match, took place at the Umaid Bhawan Palace in Jodhpur, followed shortly by the sangeet, a traditional pre-wedding celebration which includes song and dance performances by relatives and friends of the bride and groom. Both events evoked plenty of laughs from the guests and the couple who proudly posted pictures of each event on their social media.

The Christian wedding took place in front of the Umaid Bhawan Palace and was officiated by Nick’s father, Paul. The couple said “I do” under the palace’s grand outdoor structure which was decorated with hundreds of white and pink flowers. The bride wore a 75 foot long tulle veil and a custom Ralph Lauren gown designed by Ralph himself, covered in mother of pearl paillettes, crystal seed beading and Swarovski crystal embellishment. Underneath she wore a strapless gown made of over 2 million mother of pearl sequins. The groom himself was also wearing Ralph Lauren, as were the bridesmaids and groomsmen.

For the Hindu ceremony, Priyanka wore a stunning red Sabyasachi Mukherji lehenga styled with a western style red veil, a Chopard 16-carat diamond headpiece and an elaborate necklace comprising 84.50 carats of pear-shaped diamonds set in 18k white gold. The Umaid Bhawan Palace gardens were transformed by countless red and pink flowers for the occasion and ambient lighting. The couple threw an additional glamourous Hollywood style reception in Mumbai, before they headed out for their honeymoon in Oman. All the events within the couple’s wedding week were personalised with their bespoke golden monogram “NP”, which was a recurring element on all the guest welcome packs and favours. Overall the wedding was an incredibly luxurious, extravagant affair that certainly deserves a high place in our ranking.

The wedding of Italian fashion blogger and influencer Chiara Ferragni and rapper and songwriter Fedez completely took over social media in September 2018. The spectacular wedding weekend extravaganza, which was extensively shared by the couple and their guests online under the hashtag #theFerragnez (the combination of Ferragni and Fedez), was probably the most “Instagrammable” event of the year. The couple tied the knot on 1 September 2018 at Dimora delle Balze, just outside of Noto, Sicily in a visually breath-taking outdoor non-religious ceremony planned by Alessandra Grillo and stunningly decorated with decadent white florals by Vincenzo Dascanio. The backdrop of the ceremony was truly awe-inspiring, with strings of white and powder pink roses hanging romantically off fully-grown trees. During the ceremony the bride wore a beautiful haute couture Dior dress designed by Maria Grazia Chiuri. The gown featured a crochet bodice with long sleeves and a high neck and a full-bodied tulle skirt.

The reception dinner took place in a cave lit up by twinkling fairy lights and the bride changed into another custom designed Dior pale pink tulle and silk organza gown, embroidered with motifs that evoking Chiara and Fedez’s love history. After the dinner reception the guests were invited to a Coachella themed afterparty, with a funfair, Ferris wheel, fireworks and a stage with live acts and karaoke, where the bride replaced the long skirt of her second gown with a shorter ballerina skirt. The entire event featured lots of creative personal touches such as real-life animated versions of the Bride and Groom greeting the guests at the airport in Sicily and at the afterparty. The wedding was certainly one of the most inspiring events of this year, which is why we think it deserves the runner up spot in our ranking.

And the ultimate wedding of the 2018 goes to Prince Harry and Meghan Markle, of course! Although the royal wedding was less extravagant then perhaps the wedding of Chopra and Jonas or “The Ferragnez”, the impact this event made on the world was a spectacular phenomenon in itself. The story of a regular American, mixed-race girl falling in love with a real prince from one of the oldest royal families in the world is a fairy tale that we all wanted to be a part of. When Meghan Markle walked down the aisle of St George’s Chapel at Windsor Castle in her fabulous Givenchy gown, with the heavenly soprano of Elin Manahan Thomas sounding in the background, we all stopped and starred in silence, enchanted by the game changing union we were about to witness.

The fact that we were all invited to participate in this incredible historical event, where so many traditions were turned on their heads (such as the inclusion of African-American culture through the Kingdom Choir or the bride being walked down the aisle by her future father in law) generated incredible excitement and buzz not just within the media, but also in everyday conversations. Everywhere you went in May 2018, there was talk about the royal wedding and the enigma that is Meghan Markle. The wedding ceremony décor was truly beautiful, with the gorgeous flowers designed by London florist Philippa Craddock. The bride’s bouquet featured flowers chosen by Prince Harry, including Princess Diana’s favourite flowers, “Forget-Me-Nots”. For the reception, which was held in Frogmore House, we saw the bride in a high-neck modern white silk gown by Stella McCartney, although images of the after-party were not released to the public.

We crown (no pun intended) Meghan and Prince Harry as the winners of our Top Celebrity Wedding of 2018 ranking as we believe the event was a significant moment in history that captured the progression of the highly traditional institution of monarchy to a more modern and flexible version of the establishment – one that movers forward towards the future along with the society that it represents. 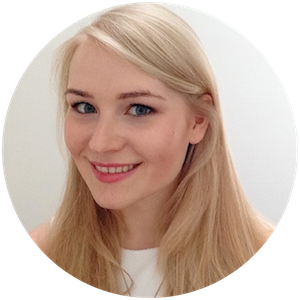 Welcome to Stories in Bloom. I’m Marika, a luxury wedding planner and designer based in West London.

To me, every engaged couple deserves a memorable and meaningful wedding that truly represents who they are, both individually and as a couple.

Our mission is to plan, design and execute your wedding in a way that allows your unique personal love story to shine through, creating an memorable experience that will enchant everyone involved.

Your wedding is not the beginning, nor the end of your love story. It’s the day when you vow to write the rest of your chapters together.

Let us make sure that beautiful moment gets the celebration it deserves!